The disinfectant used and recommended by Valdo Technic Industrial Solutions is an aqueous solution of chlorine dioxide, a PH neutral (PH 7.0), inorganic compound with a ClO2 formula. It is not dangerous to humans and kills bacteria, fungi and viruses in a thousandth of a second.

Chlorine dioxide is an agent to which no bacteria can develop resistance. It reacts with only four amino acids found in living organisms and then rapidly disappears as a gas. All living organisms contain the same twenty amino acids, so it can destroy any living micro-organism (it can even inactivate viruses!). As it evaporates quickly, it does not have time to penetrate larger organisms, so humans and animals are not harmed by the aqueous chlorine dioxide solution, even if they drink it.

The most efficient disinfectant in the world! Very importantly, chlorine dioxide, unlike ozone, is also very effective at disinfecting biofilms, which cause the majority of infectious diseases. 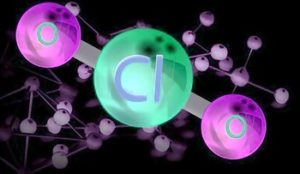 The molecule has been known since 1811, although it did not receive much attention at the time. Later, in the late 1800s, German chemists identified its disinfectant properties. Its use became topical when it was discovered that it could also be used reliably to disinfect drinking water. Since then, its use in this field has become increasingly widespread, but it has only become suitable for the treatment and prevention of human infections in recent years.

Chlorine dioxide in aqueous solution is widely used in the health sector. It is equally suitable for cleaning rooms, disinfecting furniture and sterilising instruments, equipment and machinery. It can also be used for wound treatment in appropriate concentrations.

An aqueous solution of chlorine dioxide, sprayed or spread by a vaporising machine, is suitable for disinfecting the interior of any type of building. It is also harmless to higher organisms when added to drinking water and can be used for daily preventive disinfection without emptying.